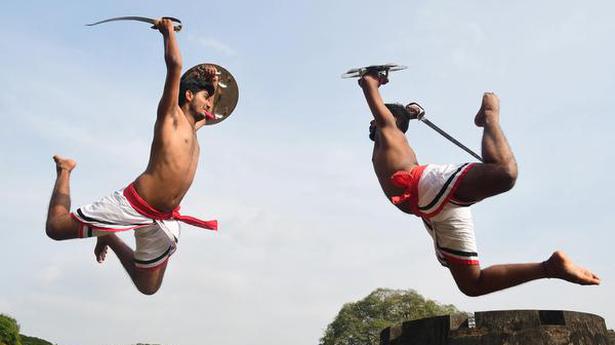 Four indigenous martial art forms walk a tightrope to maintain their core culture and the need to modernise, after their inclusion in 2021 into the Khelo India Youth Games

Every morning before sunrise, Narayanan Embranthri steps into the kalari, a rectangular training space, with his right foot first.

He reverently touches the mud floor, a gesture to God and the gurus of the ancient martial discipline of Kalaripayattu. Before his students arrive, he lights the lamp, oils his body and dons the arakacha or tight loincloth. He then goes to the southwest corner of the kalari (which means battlefield) where seven steps, representing the seven power points in the body, are built, and offers a prayer. “That’s the poothara. Every student who learns this art follows these rituals: the prayer, the dress, the techniques,” says Narayanan, who teaches Kalaripayattu at the ENS Kalari built by his father in 1954 in Nettoor, Kochi.

In a recent move, the Sports Ministry inducted four indigenous martial art forms — Kalaripayattu of Kerala, Mallakhamb of Central India, Gatka of Punjab and Thang-ta of Manipur — into the Khelo India Youth Games (KIYG). As practitioners, coaches, students and federations who have kept these ancient martial arts alive rejoice, they also voice concern over a possible dilution of the culture and ritual that is at the core of these regional forms, when modified to a sport version.

“It is a moment of great joy and pride for all of us who are continuing this 3,000-year-old tradition,” says Narayanan, who is also the secretary, sports of Kalaripayattu Association of Kerala. “Despite the British banning it, we have nurtured this native form of battle and defence. There are roughly 1,000 to 1,500 kalaris in Kerala. This recognition is as gratifying as much as it is a challenge, for teachers and practitioners.”

He is wary that this new-found scope as a sport may overshadow the essence of Kalaripayattu, if not formatted with care. While he accepts that it will make the art form more popular and recognised, he adds, “We have to take care that it does not lose its traditional element. It has rituals and philosophy.”

Kalari and yoga guru Sharath S Achari states, “This is the mother of all martial arts. Judo, Kung Fu, karate are its children. These are world famous but Kalaripayattu has remained inside Kerala. Why?” He explains that there are several grades of Kalarippayattu like meythari, which is practice of body flexibility and leg movements, followed by kolthari or fight using short and long sticks and an advanced state of sword play with shield. “As of now, we are not clear what will be included in the Khelo India competitions, and how will it be marked and graded.”

For the 50-year-old Narayanan, who began learning the art from his father at the age of 14, “A sporting career is only between the age of 7 to 21. What will happen to the sports practitioners after that?” He adds that the kalaris, registered and unregistered, have so far received little support from the Government.

However, advocate Poonthura Soman, Secretary General Indian Kalaripayattu Federation, Thiruvananthapuram, differs: “Technically Kalaripayattu is a sport. It consists of 18 different warfare techniques. In 1958 the Government of Kerala recognised the Kerala Kalaripayttu Association and affiliated to the Kerala State Sports Council. It was considered a sport then itself.” In 2015,Indian Kalaripayattu Federation was recognised by the Ministry of Youth Affairs and Sports, Government of India, as a National Sports Federation. Since then we have been conducting National Championships. This decision is a boost for the Kalaripayattu fraternity,” he says. According to him eight events ranging from basic steps to sword and shield play have been included in the Khelo India sports format.

allakhmabh Federation of India, is elated. Mallakhamb is a traditional form of gymnastics performed with a wooden pole (made of wood from sheesham or Indian rosewood and polished with castor oil), a cane, or a rope.

“This is a huge step for Bharatiya [Indian] games. Till now only Olympic games were given importance. Now indigenous sports will get respect. Earlier it was a demo game but now it is part of the mainstream; it’s a big honour,” he says, adding that they have contemporising an ancient art is required for it to remain relevant. Ramesh points out that girls are now allowed to perform with the pole, which was not the case earlier. “We have introduced that,” he says.

Though Madhya Pradesh declared Mallakhamb the State sport only in 2013, it had been developed as a competitive sport since 1981, with rules and regulations introduced at the first National Championship that year.

Harjeet Singh Grewal, president of the Chandigarh-based National Gatka Federation of India, is thrilled at the new platform accorded to Gatka. He does not fear the dilution of the cultural aspect. “It is in our hands how much we keep and how much we forfeit. We have to change with the times.”

Gatka is a style of fighting with wooden sticks that originated in Punjab in the 15th Century. Originally called Shastar Vidya, it began as a means to defend righteousness and is considered both a spiritual and physical practice. The bana and chola are worn for the ritualistic performances but, when performed as a sport, the practitioner wears track pants and T-shirt. “The techniques remain the same,” he says emphatically. Besides, the stick is no longer the size of a man, he points out.

Gatka originally began with a display of over two dozen equipment used in battle and self-defence. “Of these, only the gatka has been taken into the sport. Our aim is to take it till the Olympics,” he says, adding that this may necessitate redesigning the format.

“It is a moment of great pride that Thang Ta has been made a part of the Youth Games. It would have passed into oblivion in the recent decades had the national recognition not come,” he says, adding that it can be compared to the Chinese Wushu, the Japanese Ninjutsu and the martial arts of the Filipinos. Thang Ta, which has eight to 10 types of punching and 12 types of kick techniques, is “the best form of self-defence,” says Vinod.It was converted into sports version 25 years ago, and 25 National Championships and five International championships have been conducted so far. “If a newer format is required for Khelo India Youth Games, so be it,” he adds.

HYDERABAD, TELANGANA, 27/03/2015: Artistes from Manipur display ‘Thang- Ta’ dance during the inauguration function of “Parv Purvottar” festival at Shilparamam in Hyderabad on Friday, March 27, 2015. Thang means sword and Ta means spear. Thang-Ta is the martial art of Manipur practiced with sword and spear such as sword fight, spear fight and wrestling style of fight (Mukna). These were not originally a performing art but a serious form for self-defense event, acts of aggression against the enemy in martial tactics. Thang-Ta provided basic training of warfare, and kings of Manipur maintained Than-Ta experts in their courts. Photo: Nagara Gopal

A conservative Narayanan sums up the challenge: “Keep the tradition and develop the sport.” 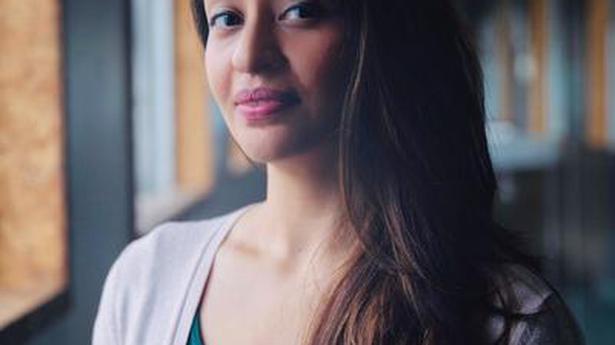 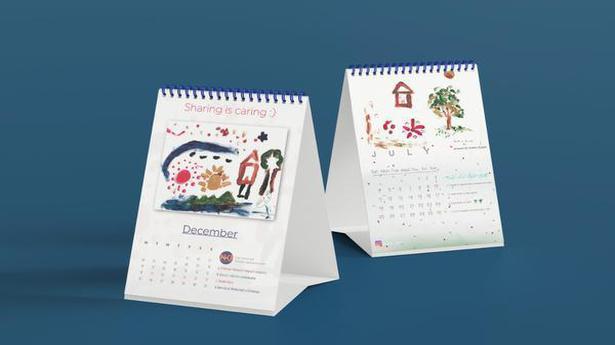 These calendars showcase the talents of people with special needs 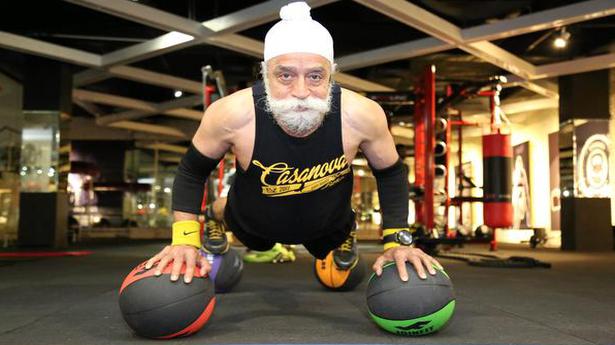 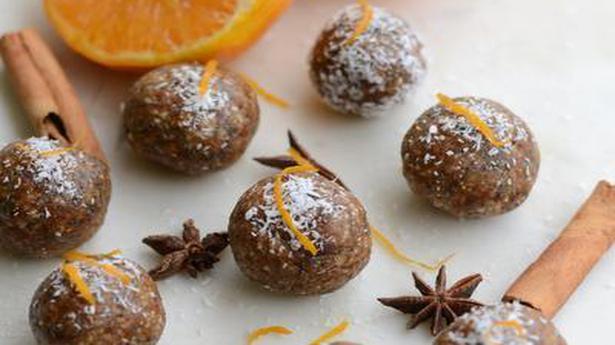 What is MAKE SMTHNG? 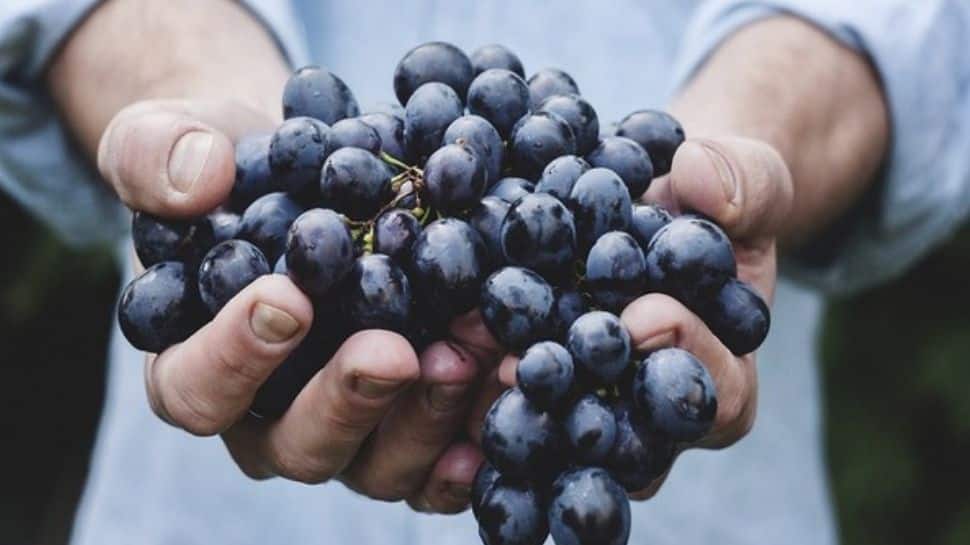