On inflation, the Chief Economic Adviser said it is expected to be range-bound and should not exceed the prescribed level.

India’s Gross Domestic Product (GDP) contracted by 7.3% in 2020-21, as per provisional National Income estimates released by the National Statistical Office on Monday, marginally better than the 8% contraction in the economy projected earlier. GDP growth in 2019-20, prior to the COVID-19 pandemic, was 4%.

The Gross Value Added (GVA) in the economy shrank 6.2% in 2020-21, compared to a 4.1% rise in the previous year. Only two sectors bucked the trend of negative GVA growth — agriculture, forestry and fishing, which rose 3.6%, and electricity, gas, water supply and other utility services (up 1.9%).

Though this is the bleakest performance on record for the economy, the fourth quarter (Q4) of 2020-21 helped moderate the damage, with a higher-than-expected growth of 1.6% in GDP. This marked the second quarter of positive growth after the country entered a technical recession in the first half of the year.

GDP had contracted 24.4% in the April to June 2020 quarter, followed by a 7.4% shrinkage in the second quarter. It had returned to positive territory in the September to December quarter with a marginal 0.5% growth.

GVA from trade, hotels, transport, communication and broadcasting-related services recorded the sharpest decline of 18.2%, followed by construction (-8.6%), mining and quarrying (-8.5%) and manufacturing (-7.2%).

Economists said these numbers will moderate growth prospects for 2021-22 through the base effect, even as the scourge of the virus is hurting activity again. 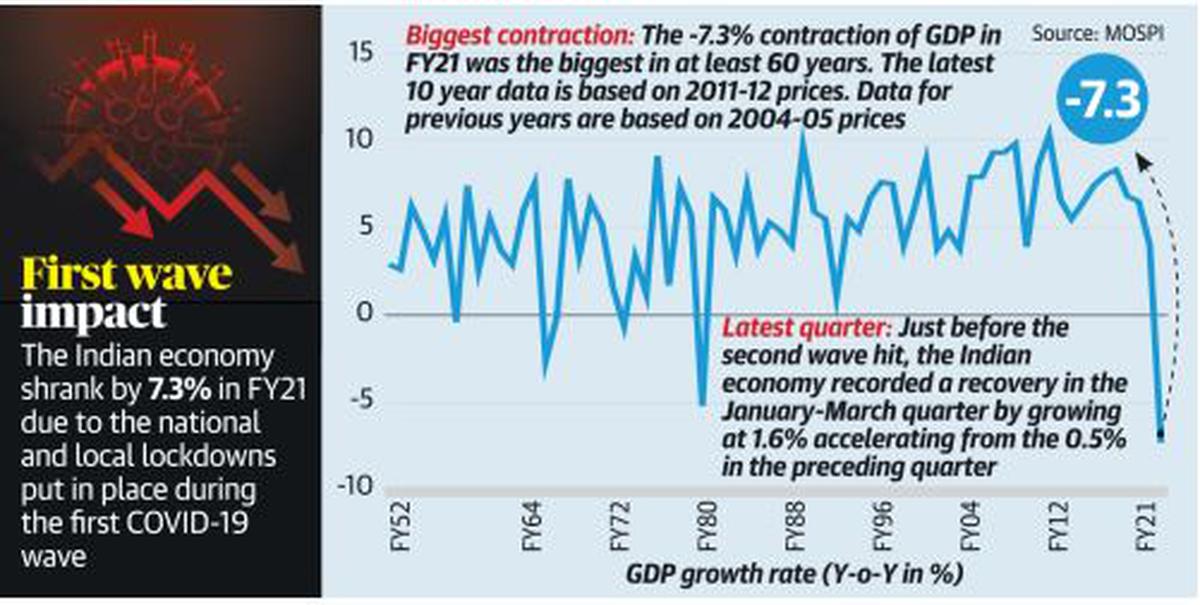 On the second wave’s impact on the economy, Chief Economic Advisor (CEA) to the Finance Ministry K.V. Subramanian said he doesn’t expect GDP forecasts to be significantly affected.

“Whether growth will be in double digits or single digits, there is uncertainty. Some of the scientists are talking about the possibility of a third wave too. It would be speculative to tell you exact numbers,” he said, stressing that vaccination is important for the health of the people as well as the health of the economy.

While restrictions across States have had an impact on activity, the CEA said the second wave seems to have peaked on May 8 and is on the decline, so it is anticipated that lockdown-like curbs will reduce and eventually be removed, which will help the return of economic activity.

“With a lower contraction in GDP as well as GVA in 2020-21, the sharp recovery projected for 2021-22 by a number of agencies like the IMF at 12.5% and the RBI at 10.5% may have to be moderated. These projections were done prior to the impact of the second COVID wave. The combination of the second wave and the revised base effect may imply a lower GDP growth for the Indian economy for 2021-22, may be in the range of 9-9.5%,” said D.K. Srivastava, chief policy advisor at EY India.

“The extent of recovery in the performance of the informal sectors in Q4 FY2021 remains uncertain, and we continue to caution that trends in the same may not get fully reflected in the GDP data, given the lack of adequate proxies to evaluate the less formal sectors,” said Aditi Nayar, chief economist at ICRA.

Recovery hopes will hinge on the duration for which localised restrictions will persist in coming months and whether an accelerated pace of vaccine rollout can prevent a third Covid surge, she said.

“The economic outlook remains highly uncertain, and periodic material revisions to our growth forecasts may persist in FY2022, like last year. At present, we expect real GDP to expand in the range of 8%-9.5%,” Ms Nayar.

The National Statistical Office attributed the improvement over its earlier growth estimates, to the improved performance of indicators, used in compilation of GVA, in the fourth quarter of 2020-21, owing to the calibrated and steady opening of the economy.

The NSO also warned that data collection had been impacted as much as any other activity by the pandemic, so its estimates could undergo sharp revisions.

“Considering the current COVID situation, the statutory timelines for filing the requisite financial returns of fourth quarter have been extended by the Government. Consequently, the private corporate sector estimates of industries are based on other indicators like the Index of Industrial Production, GST, etc. This may have implications on subsequent revision of these estimates,” it said.