New Delhi: Actress Kangana Ranaut, who has been permanently banned from Twitter for her controversial tweets that defy the social media site anti-hate speech policy, has now taken to Instagram to share her uncensored opinions with the world.

The actress recently recovered from COVID-19 virus, which she called a ‘small time flu’ earlier, took to her Instagram stories to share her ‘lessons from the pandemic’ which she says ‘might be complex or too evolved for a few’.

“Thought of the day might be complex or too evolved for few but some will get it. Lessons from the pandemic 1) No one is insignificant everyone can help but it’s important to recognise your place, role and influence in the society,” wrote the ‘Queen’ actress.

Kangana, talking about how rich people should act during these times said, “2) Don’t beg from poor people if you are rich. 3) if your influence allows arrange for oxygen, beds or medicines for individuals you might save a few. 4) if you are a prominent personality then don’t run after a few, protect and support the one who can save millions if right environment and support given to him” 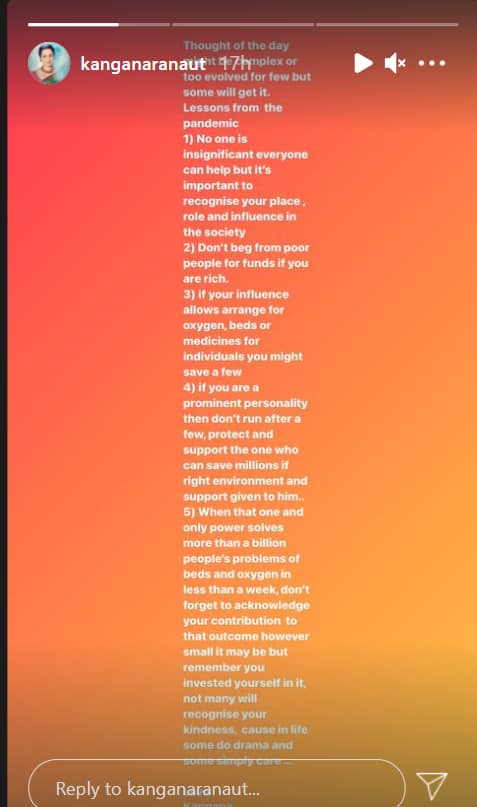 Talking about acknowledging one’s efforts put in, the actress wrote, “5) When that one and only power solves more than a billion people’s problems of beds and oxygen in less than a week, don’t forget to acknowledge your contribution to that outcome however small it may be but remember you invested yourself in it, not many will recognise your kindness, cause in life some do drama and some simply care … Love Kangana.”

Kangana’s statement comes at a time when various celebrities like Priyanka Chopra, Anushka Sharma and Virat Kohli are raising funds against COVID-19 through fundraisers in which they are urging everyone to contribute against the current COVID-19 crisis in India.

Earlier, actor Amitabh Bachchan revealed that he has contributed a total of INR 15 crore to numerous organisations that are helping India in its fight against the COVID-19 pandemic. The megastar said that his contribution is equal to the amount other people are raising in fundraisers and he himself feels embarrassed to ask other people for money.