It has also stated that conditions are likely to become favorable subsequently for further advance of Southwest Monsoon into some more parts of Maharashtra; remaining parts of Karnataka, Telangana, Rayalaseema, Coastal Andhra Pradesh, Bay of Bengal and northeastern states, entire Sikkim and some parts of Odisha and West Bengal during subsequent 24 hours. 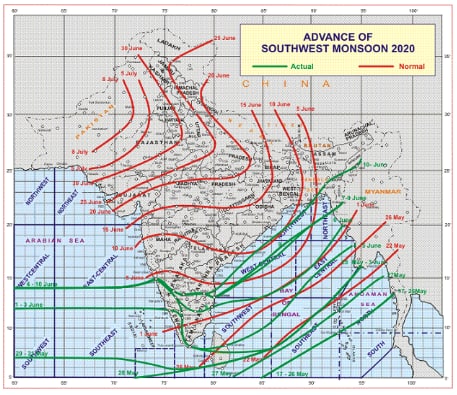 Heavy rains have been predicted in many districts of Maharashtra, Odisha and Madhya Pradesh during this time. Notably, several states including Delhi, Rajasthan, Madhya Pradesh are getting intermittent rains due to pre-monsoon activities.

It further stated that the SW Monsoon advanced into the remaining parts of Tamil Nadu, some more parts of west-central and north Bay of Bengal, adding that most parts of Mizoram and Manipur and Tripura and some parts of Assam and Nagaland.

In the next 24 hours, monsoon can hit the remaining areas of Goa, Karnataka, Telangana, Odisha, Sikkim, and West Bengal.

The low-pressure area over East-central and adjoining Westcentral Bay of Bengal persists. The associated cyclonic circulation extending up to mid-tropospheric levels tilting southwestwards with height also persists. It is likely to move west-northwestwards and become well marked during the next 48 hours.

New Delhi: The Board of Intermediate Education Andhra Pradesh is all set to release the Inter results 2020 for first and second-year students on...
Read more
Nation news

New Delhi: In order to boost immunity among its consumer at the time of coronavirus COVID-19 pandemic, Amul has come out with two new...
Read more

On Saturday, the number of new daily infections hit a record 57,683. (File)Washington: The United States passed another grim coronavirus milestone Monday as the...
Read more

Former Indian captain and experienced wicketkeeper-batsman Mahendra Singh Dhoni, who has made a total of 538 international appearances for the national side so far,...
Read more

ABOUT US
Welcome to Windownews.in, your number one source for all latest news . We're dedicated to providing you the very usefull news of world,nation,state,business,health,entertainment ,science and environment,sports and technology.
Contact us: -
© windownews.in
MORE STORIES
Nation news

Domestic flights resume on May 25 after two months of COVID-19...

May 25, 2020
New Delhi: Nearly two months after the countrywide lockdown was imposed to contain the novel coronavirus pandemic, domestic flight operations resume on Monday (May...
%d bloggers like this: